The starting age group for air rifle is from 12years. The scope and exposure for the 10m air rifle is, the candidate can participate in the inter-school level competitions(SGFI) from District level to National level. The district level competitions are held by the ‘District Sports Office’. The rifle and the accessories required for this basic level is been provided by the academy itself.

The format for a 10m air rifle match is a qualification round of 60 shots fired within a time frame of 105 minutes for men. Women's matches are 40 shots in 75 minutes If the match is not using electronic scoring systems, an additional 15 minutes is added for men (10 minutes for women) to allow for the switching of paper targets. The score is out of 400 for a match. The events are categorized under the age groups of 14, 17 and 19 years. First athletes play at the District level, then the first three rankers with the highest score get qualified for the Divisional Championship, further in the same way again three of the rankers qualify for the State Championship and similarly for the National Championship.

For the 10 meter air rifle and air pistol disciplines, match diabolo pellets are used. These pellets have wadcutter heads, meaning the front is (nearly) flat, that leave clean round holes in paper targets for easy scoring. Match pellets are offered in tins and more elaborate packagings that avoid deformation and other damage that could impair their uniformity.

Match air rifle shooters are encouraged to perform shooting group tests with their gun clamped in a machine rest to establish which particular match pellet type performs best for their particular air gun.[3] To facilitate maximum performance out of various air guns the leading match pellet manufacturers produce pellets with graduated "head sizes", which means the pellets are offered with front diameters from 4.48 mm (0.176 in) up to 4.52 mm (0.178 in).

However at higher and top competitive levels, even these variations are thought too coarse-grained and match pellets are batch tested; that is, the specific gun is mounted in a machine rest test rig and pellets from a specific production run on a specific machine with the same ingredients fed into the process (a batch) are test-fired through the gun.[4] Many different batches will be tested in this manner, and the pellets which give the smallest consistent group size without fliers (shots which fall outside of the main group) will be selected (small but inconsistent group sizes are not useful to a top competitor); and the shooter will then purchase several tens of thousands of pellets from that batch. Group sizes of 4.5 mm (0.177 in) diameter are theoretically possible, but practically shot groups of 5.0 mm (0.197 in) are considered highly competitive.[5] Unbatched ammunition, especially if the air gun is not regularly cleaned, is generally thought to be capable of only 8.0 mm (0.315 in) diameter group sizes. Batch-testing match pellets for a particular gun is not generally thought to be worthwhile until the shooter reaches a high proficiency level (around the 95% level i.e 570 for the qualification round).

The occurrence of high scores is mainly due to the continuous development of the employed match air rifles from spring-piston type designs into single-stroke pneumatic and pre-charged pneumatic (PCP) designs. Modern PCP match rifles from the leading manufacturers all feature regulated PCP actions to minimize shot-to-shot operating pressure variation and hence muzzle velocity inconsistency, mechanical or electronic match triggers offering fast lock times, shoot practically recoilless and vibration free, exhibit minimal movement and balance shifts and can be tailored by an adjustable aluminum stock and other user interfaces and various accessories to the individual shooters personal preferences to promote comfortable and accurate shooting from a standing position. Combined with appropriate match pellets these rifles produce a consistent 10-ring performance, so a sub-10.0 average result can be attributed to the participant and at 2019 top competition level a 10.5 average result can be regarded as excellent. 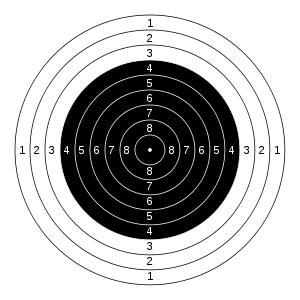